Described as a cross between First Dates and The Apprentice, fixed-rig documentary series The Job Interview portrays real-life interviews for real jobs

The perils of the real-life job interview are to be laid bare in a new Channel 4 series airing next month. This new show uses multiple cameras to reveal in detail for the first time the terror and triumph of real-life interviews, highlighting every aspect from handshake to potentially life-changing job offer.

The Job Interview will run across five episodes with each programme featuring two sets of job interviews for a real job.

Described by insiders as a cross between The Apprentice and First Dates, it is thought to be the first time that the producers of a ‘fixed-rig’ documentary show like this have been unable to cast the main players.

Here at Adam Butler Consultancy, we personally can’t wait for this as we’ve been the crucial linch pin in nearly 500 interviews in the last 6 months.  We know how nerve-wracking it can be for both the employer and the candidate.

If you’re employer looking to shake up your interview techniques a little by all means, we think you should watch this show, but we also take a look at some new interview questions we think you should ask. https://adambutlerltd.co.uk/4-terrible-questions-job-interviewers-should-never-ask-again-ever/ 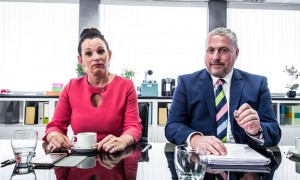 In The Job Interview, the applicants were recruited through real advertisements, with employment law preventing the production company from weeding out the candidates they preferred.

Each edition of the five-part series explores two different companies filling two separate posts. The candidates are interviewed in an office building in Westminster in front of hidden cameras, before having a debrief with the show’s producers. The reactions of the interviewers to their performance are also filmed.

The Job Interview’s co-executive producer Simon Dickson, who has overseen shows including First Dates, One Born Every Minute and The Hotel, said:  “This programme is the first documentary series of its type that has not been cast. People are frequently accused of casting people who work well on television.

“We realised before making this series that we couldn’t do anything with that. We had to completely relinquish control over the bit of the process that we are good at doing which is picking individual stories. It was a massive leap of faith not to do that.”

In episode one, five candidates are interviewed for an admin job at a Welsh van hire company, Neath-based Low Cost Vans. In the same opening instalment an events job at luxury weddings venue Wickham House is up for grabs, with the interviews overseen by the hotel’s owner Phillipa D’Arcy and her daughter Roberta, AKA Bertie.

Across the hour the pitfalls, errors and high emotion of a real interview situation are shown, with the winning candidates unveiled at the close.

Here at Adam Butler Consultancy we can help you every step of the way, because we think differently about recruitment, find out more…